The first of the four rare painted hangings in the Hardwick Chapel which inspired our exhibition. ©NTPL/John Hammond.

On a visit to Hardwick in the summer of 2011, I encountered two striking textiles. One was a magnificent appliqué hanging depicting ‘Faith and his contrary, in the person of Mahomet’: something I had read about in the inventories Bess made of her three properties in 1601, but never seen. The other was a rare and important painted cloth which illustrates the conversion of St Paul: a theme beloved of artists across Europe during the Renaissance, but which I was surprised to find painted onto fabric in a household chapel. Between them, these two luxurious objects encapsulate many of the obsessions and events of the Elizabethan age. The connections and conversations they make possible inspired the ‘Virtue and Vice’ exhibition.

Built during the 1590s, Hardwick Hall is one of the greatest surviving Elizabethan houses. In its own time, Hardwick — with its vertiginous walls of local stone, and massive expanse of glass — was already recognised as an exceptional building. Its interior was luxurious, hung with expensive tapestries and decorated with rich silks and velvets. Hardwick is also remarkable in remaining more-or-less unchanged, in part because later generations of the family made nearby Chatsworth their principal residence, so it is still possible to recapture the vision and ambition of its indomitable founder, Elizabeth Shrewsbury — better known as Bess of Hardwick. 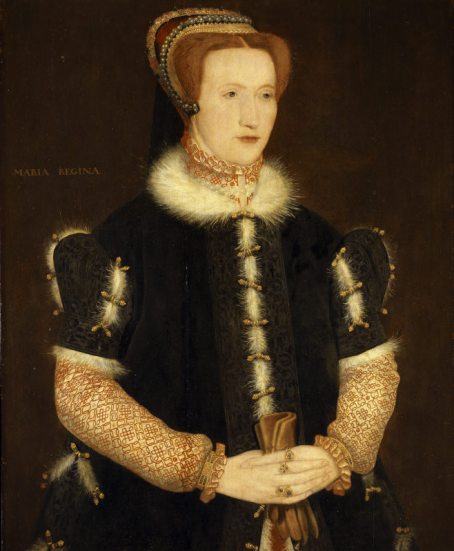 This portrait, painted by an anonymous artist in the 1550s, shows Bess at around the age of 30, when she was married to William St Loe. I was struck by the French and Spanish influences evident in her luxurious clothing. ©NTPL/Angelo Hornak.

The Conversion Narratives team knew we wanted to create an exhibition that drew together both the history of Bess and her family and the diverse stories of the wonderful objects that populate this grand house.

Our hopes for the display went further still: we wanted to show how Hardwick Hall was inextricably tied not only to the fashions and events of sixteenth-century England, but to European and even global encounters and transformations. From Spanish plates to musical tables, aged sea-dogs to formal portraits, every object at Hardwick has its own set of stories to tell, and those stories are made all the richer when we bring them into conversation with the poetry, music, politics, and philosophies of their age.

These sober sea-dogs – part of one of the finest surviving pieces of sixteenth-century furniture – are similar to the creatures that sport in the seas on early modern maps of Britain and the expanding known world. ©NTPL/Nick Guttridge.

What, then, should we call our exhibition? We came up with various suggestions, and dismissed them just as quickly. ‘At home with Bess of Hardwick’? Too parochial. ‘Domestic devotion’? Too narrowly focussed. ‘Cultural Encounters’? Too predictable. And then we realised that our title was right there in the first object that inspired the exhibition: one of the first things the visitor to Hardwick gets to see. The ‘Faith and Mahomet’ hanging is, after all, part of a very ancient tradition of depicting virtues together with their opposing vices, offering guides to good behaviour that nonetheless remind each viewer of the alluring temptations of being bad.

Like many Elizabethan households, Hardwick Hall’s interior functioned as a richly-decorated guide to good living: activities from sewing to singing, eating, and reading were all designed to perpetuate virtue and avoid vice — even if each of those pastimes veered dangerously close to luxurious (and vicious) excess.

So, ‘Virtue and Vice’ it was. And that title seems all the more appropriate when we come to reflect on the significance of our exhibition for today’s world. As academics, we are wary of making grand claims that make the past look suspiciously like the present, yet we have been struck, time and again, by the way that the concerns of the sixteenth century resonate with the issues of our own — the power of Islam, and the difference between popular fantasy and lived reality; where objects come from and how they are made; how to live well; and how to use the resources you have available to create your own, personal story and find a place in a complex world.