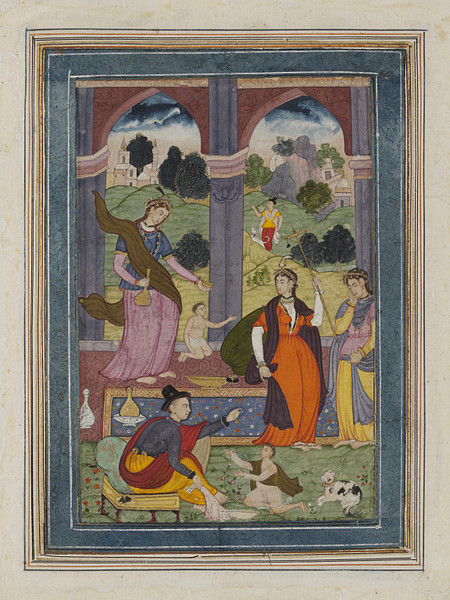 Searching the V&A catalogue, I stumbled across this fabulous image. It is a characteristically refined and naturalistic painting done by an unknown artist at the Mughal royal court, probably between 1600 and 1610. The Mughal Empire stretched across most of present-day India and Pakistan, where it consolidated the presence of Islam, and spread Muslim (and particularly Persian) arts and culture into South Asia.

It was in 1573 that contact between Mughal Empire and European travellers was first initiated, after the emperor Akbar led his forces into Gujarat and captured the great port city of Surat. As a result of his encounter with members of the Portugese settlement at Goa, Akbar sent an embassy to Goa, which, in turn, prompted several Jesuit missions to the Mughal court in the hope of converting these leading Moslems to Catholicism (the Jesuits are an evangelical order within the Catholic Church).

As was customary the Jesuits brought gifts, as well as prints and paintings. These were shown to the royal artists, who began to adapt and copy elements within the distinctive Mughal style. This painting is believed to show the infant Jesus being presented in the Temple at Jerusalem, forty days after his nativity. It stands as an intriguing reminder of the cultural, literary, and artistic encounters which accompanied missionary activity, and the ways in which a culture might appropriate or adopt certain elements of foreign religious and narrative traditions and incorporate them within their own worldview and practices.

You can see the image at the V&A where it forms part of the South Asian collections, or take a look at it, with several additional images, on the V&A website. You can find out more about Mughal India on the British Museum’s interactive Mughal India room, and view some more Mughal art in an online exhibition at the Ashmolean Museum, Oxford.

3 thoughts on “Cultural Encounters: Jesus and Jerusalem in the Mughal Court”